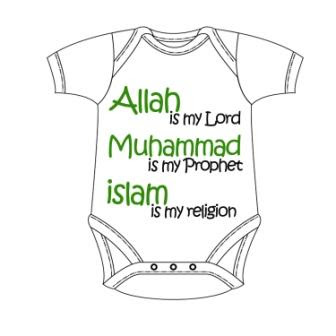 Upon the first indications that a child is beginning to speak, the parents should strive to teach him the statement of tawhid by dictating it to him.

Umm Sulaim, may Allah be pleased with her, would dictate to her son, Anas, saying: "Say: There is no deity that has the right to be worshipped except Allah. Say: I bear witness that Muhammad is the Messenger of Allah." This was before the age of weaning. --Siyar A'laam an-Nubalaa

It should be consistently repeated in front of him. This applies especially to the mother who should do that when playing with him. Then when the child grows up accustomed to it and begins to understand, you should explain to him so that he understands its meaning.

He should be made accustomed to put his trust in Allah and to know that He is the One who cures and that we are obligated to love Him and worship Him. The father should also teach his son to love the Prophet and obey him. He should relate to him some of his characteristics and manners and inform him that he would love children and play with them as well as other things that their minds can comprehend.

He should repeatedly ask them: "Who is your Lord? Who is your Prophet? What is your Religion? Where is Allah?"

The child should learn to have a love for the Companions and righteous people and he should memorize Surah Al-Fatihah, Surah Al-Ikhlas and the Mu'awadhatain (i.e. Surahs Al-Falaq and An-Naas).
Posted by FATIMA MD at Sunday, November 16, 2014