About “The Poem of the Scarf” famously known as ‘Qaseedah Burdah’

{They Worship besides Allaah things that hurt them not, nor profit them, and they say: “These are Our intercessors with Allaah.” say: “Do you inform Allaah of that which He knows not In the heavens and on the earth?” Glorified and Exalted be He above All that which they associate as partners with him} [18:10]
Busairi’s exaggeration and ignorance of the knowledge of Tawheed-Uloohiyah led him to follow the footsteps of the Jews and Christians, regarding whom the Messenger of Allah (sal-Allaahu ‘alayhe wa sallam) said:

The Messenger of Allah also said:


You will follow the practices of your predecessors, inch by inch and yard by yard; so much so that if they were to enter a lizard’s hole, you would also follow them

When he was asked if he meant the Jews and the Christians, he replied:

Surprisingly, many of those who have clenched on to the ‘Poem of the Scarf’ by Busairi with their molar teeth, are those who claim to be blind-followers of Imam Aboo Haneefah, ascribing themselves to the Deoabndee and Barailwee sects.
However, Imam Aboo Haneefah said:
“It is not befitting for anyone to call upon Him [Allaah], except by Him, and with the supplications He has permitted and ordered. This is understood from His statement:

{All the Most beautiful names belong to Allaah, so call on Him by them, and leave the company of those who belie or deny [or utter impious speech against his Names.] they will be requited for what they used to do} [07:180]
The Imam also said:
“It is detested [Makruh] for the suppliant to say, ‘I ask You by the right of so and so,’ or, by the right of Your Prophets and Messengers, or ‘by the right of the Sacred House and the Sacred Sanctuary.’”
Will the Deobandees and Barailwees also label Imam Aboo Haneefah a deviant for not extolling the Messenger of Allah (sal-Allaahu ‘alayhe wa sallam) as Busairi did? If the one who abandons blind-following [taqleed] of Imam Aboo Haneefah is declared as being misguided, lead astray and following one’s whims and desires, then the Deobandees and Barailwees have committed this very crime in addition to exaggerating in the name of love, and giving preference to Busairi -who wasn’t even a learned man or a scholar- over their ‘Imam-e-Azam’ Aboo Haneefah.
It may be a shock to many people that the founder of Jamaatut-Tableegh, ‘Maulana’ Muhammad IIyaas, stated in his parting advice to ‘’Maulana’’ Yusuf, his successor at the time of his death:
“Ulema should read the Qasida Burdah and the Shiyamul-Habeeb with respect and honour, otherwise without respect and longing, it will be of no use. From reading….. the Qasida Burdah attachment (with Rasuluallah (sal-Allaahu ‘alayhe wa sallam) ) is established.”
I say, rather than an individual establishing an attachment with the Messenger of Allah (sal-Allaahu ‘alayhe wa sallam), he or she is indeed forging an attachment with shirk and promoting none other than the founder of Jamaatut-Tableegh. The hidden agenda of Jamaatut-Tableegh is evident to Ahlus-Sunnah wal Jama’aah, which is to revive Sufism, seizing the innocent people from following the Sunnah, steering them to towards following the teachings of the ‘great’ Sufi, Maulana Ilyas; its founder and the reviver of Sufism through his bigoted sect Jamaatut-Tableegh. In reality, Jamaatut-Tableegh is reviving and propagating the dawah of the Sufis, even on their death beds.
In conclusion, O Muslim! I decided to fulfil my obligation, seeking reward from Allah, the Most High, Alone, by translating into English a synopsis of this poem done by Shaykh Muhammad Jameel Zeeno of Syria so that the reality of this poem be exposed to the innocent Muslims. [Sheikh Muhammed Jameel Zeeno, may Allah preserve him, himself was a Sufi before being guided by Allah, the Most High, to the truth.]
This work is In-sha-Allah, for the benefit of those who seek the truth sincerely without being biased and prejudiced in any manner. It is for those who have the zeal to love the Messenger of Allah (sal-Allaahu ‘alayhe wa sallam), in the manner that his noble companions loved him, without any elements of exaggeration. May Allah guide us all to the truth! Ameen!
Finally, I end my introduction with the great statement of the Messenger of Allah(sal-Allaahu ‘alayhe wa sallam): It has been reported on the authority of Anas bin Malik that a man said to the Messenger of Allah(sal-Allaahu ‘alayhe wa sallam): “O Muhammad! O the best amongst us, and the son of the best amongst us, and our master, the son of our master…”
He (sal-Allaahu ‘alayhe wa sallam) responded by saying:

O People! Say only that which is in accordance to the doctrine of the people of your belief and Deen; and call me a Prophet and a Messenger, and do not let the Shaytaan or the Shayaateen try to overpower and vanquish all of you by obtaining you all as agents and representatives,” and then he said one of the two things: “I am Muhammad the son of Abdullah, or I am Muhammad, the slave of Allah and His Messenger, I do not like you to raise me above the status assigned to me [revealed] by Allah, the Almighty, All-Powerful

Synopsis of Qaseedah Burdah by Shaykh Muhammad Jameel Zeeno
All praise is due to Allah, the Rabb of mankind, jinn, and everything that exists; and may the praise and peace of Allah descend upon his trustworthy Messenger (sal-Allaahu ‘alayhe wa sallam), his noble family, and all his noble companions. To proceed:
This poem by the poet ‘Busairi’ is famous amongst many people, especially the Sufis. If we were to reflect and contemplate on its meanings, then surely we would perceive and observe in it the infringement and violations against ‘The Noble Qur’an’ and the Sunnah of the Messenger of Allah(sal-Allaahu ‘alayhe wa sallam)!
Busairi says in Chapter 10 of his poem, the Poem of the Scarf:

يا أكرم الخلق ما لي من ألوذ به * * * سواك عند حلول الحادث العمم
Most generous of mankind, I have no one to take refuge in;
Except you at occurrence of widespread calamity.
The poet Busairi is calling and seeking the help and aid of the Messenger of Allah (sal-Allaahu ‘alayhe wa sallam) and is saying to the Messenger of Allâh (sal-Allaahu ‘alayhe wa sallam): ‘I cannot find anyone to take refuge and shelter with at the time of general calamities and hardships except with you.’
This is classified as being Major Polytheism (Ash-Shirkul-Al-Akbar), which regulates the violator to remain and be destined to the Hell-Fire for eternity if he does not repent from it; hence the statement of Allâh:

{And invoke not besides Allâh any that will neither profit you, nor hurt you, but if in case you did so, you shall certainly be one of the Dhâlimûn} [10:106]
The word Dhâlimûn means: the polytheists and wrongdoers because associating partners with Allâh in worship is a great Dhûlm: wrong.
The Messenger of Allâh (sal-Allaahu ‘alayhe wa sallam) said:

فإن من جودك الدنيا وضرتها
For verily amongst your bounties is this world, and the hereafter.
This is denial of the Qur’an in which Allaah has stated:


Do not praise me excessively as the Christians did to Isaa the son of Maryam; verily, I am only a slave, so call me instead the slave of Allah and His Messenger

{If Allâh touches you with harm, none can remove it but He} [17:06]
The Messenger of Allah (sal-Allaahu ‘alayhe wa sallam) said:


If you ask then ask from Allah, and if you seek help then seek it from Allah

In Chapter Nine, he writes:
فإن لي منه ذمة بتسميتي محمداً * * * وهو أوفى الخلق بالذمم
For verily I have a security from him due to my name.
(Being) Muhammad, while he is the most faithful of mankind in fulfilling his promise.
Busairi is saying: ‘Indeed I have a promise with the Messenger of Allah (sal-Allaahu ‘alayhe wa sallam) that he will enter me into paradise, because of my name being Muhammad.’
From where did he get this promise and guarantee? We know many people who are transgressors and communists from amongst the Muslims whose name is Muhammad. Is naming somebody with the name Muhammad a justification for them to enter paradise? Whereas the Messenger of Allah (sal-Allaahu ‘alayhe wa sallam) said to his beloved daughter Fatimah may Allah be pleased with her:


Ask me of what I have anything you wish; I possess nothing with which to protect you from Allah

In Chapter Ten, Busairi writes:
لعل رحمة ربي حين يقسمها * * * تأتي على حسب العصيان في القسم
Perhaps the mercy of my Lord when distributed.
Would be distributed in proportion to the sins.
This is [everything] but truthful and authentic. If the mercy of Allah brings distribution accordingly to the degree of the sins committed as indicated by Busairi in the aforementioned poem, then as a result, it would be incumbent upon the Muslim to increase in his or her sinning until they obtain more from the mercy of Allah. This is something that no Muslim or any intellectual person could say, because without doubt, it contradicts the statement of Allah:

{My Mercy embraces all things. That mercy I shall ordain for those who are the Muttaqûn [Allah fearing slaves], and give Zakât; and those who believe In Our Ayât} [156:07]
In Chapter 3, He writes:

وكيف تدعو إلى الدنيا ضرورة من * * * لولاه لم تخرج الدنيا من العدم
How can the necessities of such a noble personality incline him towards this world.
For had it not been for him this world would not have come out of non existence.
Busairi is saying: ‘Had it not been for the Messenger of Allah, the world would have not been created?’ [i.e. this world was created for the Messenger of Allah.]
Allah, the Most High proves him to be a liar and states:

{Worship your Rubb until there comes unto you the certainty [i.e. death]} [99:19]
In Chapter Five, he writes:

أقسمت بالقمر المنشق إن له * * * من قلبه نسبة مبرورة القسم
I take an oath (of truth) by the moon that was split, it bears.
A connection with his heart (which shows) the truth of my oath.
The Poet Busairi is swearing and taking an oath by the moon, where as the Messenger of Allah (sal-Allaahu ‘alayhe wa sallam) has indeed said:

[This is an authentic Hadeeth reported by Imam Ahmed in his Musnad]
In Chapter Three, he writes: 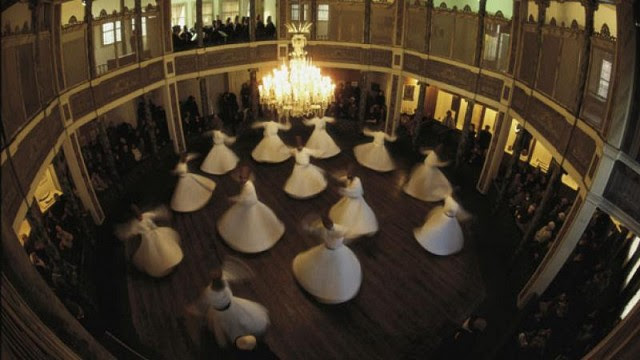